Exploring the stages of team development 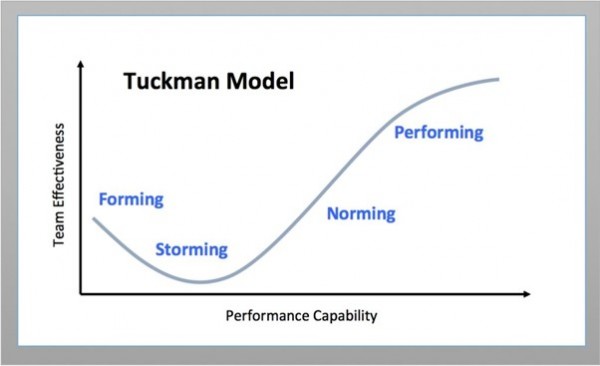 The progression of stages is not meant to be a linear process. The stages will take shape when the team changes in dynamics with team members coming and going. Just as a recap, here are the stages and definitions:

A team kicks off, and everyone is on their best behaviour. People rally together for a common cause aligned to a mission and purpose. At this point, the team is just getting comfortable, making connections, and bringing their skills to the table to help the mission succeed.

Okay, we're a few weeks in now. The niceties start to wear off a bit, and the honeymoon period is over. Differences in opinions, interpersonal issues arise, personality clashes, and work styles start to come out from different team members. When this happens, teams need to work their way out before they get stuck. Agile coaches and ScrumMasters can facilitate and help the team through this. Consider getting them aligned to the 'social contract' or 'team rules' or even the general code of conduct (HR policy – if it gets to that). Constructive and respectful differences of opinion are needed to point out weak spots in the team.

Teams who can move to this stage are on a smooth road of working with each other, and there is a common understanding and acceptance of the team dynamic.

Well done. If you are at this stage, the team dynamics and good norms have been accepted. The team is like a well-oiled machine. Team members can respectfully challenge each other to grow, people's needs are being met, and everyone is focused on the same goal.

Tuckman added this stage to the model a decade later. When a team is dismantled after they finish their work or product delivery, team members join other teams to help build them up.

In his article 'The Team Development Life Cycle: A New Look', Tom Edison extended the model and argued the need to look beyond the performing stage to explore how we might keep teams at high-performing levels. Edison's thesis mentions that teams may not always follow the four stages of growth, and teams may not adjourn. Edison labels Tuckman's four stages as the functional side of the coin and develops his insights by bringing in the informing, conforming, and deforming stages. 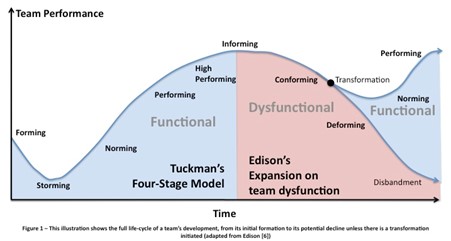 This is the midpoint in the journey when the team has reached high performance. The team is being recognised throughout the organisation, and management is capturing the processes and lessons learned to replicate the team's success. This is the tipping point before the team begins its decline into complacency. To avoid this, team members need to remember that agile is a journey, not an end state. And teams need to continuously improve.

When the team starts to get complacent, laziness and groupthink begin to creep in. These are signs to look out for that the team might be on a slippery slope downwards. Innovation and creativity will also take a hit because team members start to think alike.

So, if you are here, according to Edison, team members are gradually losing the sense of gratification and motivation that they had at the beginning of the Tuckman model. A sign of this is just not turning up to team meetings or even pulling out altogether. If the team is in the deforming stage, any effort could be futile as the team may well be past the point of no recovery.

The addition of these stages to Tuckman's model shows a tipping point before teams become dysfunctional. For any team, it's crucial to understand and observe these patterns, especially at the informing and conforming stages, before the team has a chance to deform. To avoid a team's decline, watch and catch it early before it has the chance to manifest. This presents an opportunity for you and your teams to get creative, invent different patterns, practices and constantly evolve your way of working.

Your details have been submitted and we will be in touch.